When William George Wright married Sarah Dennis on 28 December 1848, there were two witnesses to the marriage listed on the marriage record: Isaac Smith, Jr. and James Douglas.

As I have written before (and here and here), William Wright was a carpenter or builder in Charlottetown, and there are several historic houses that can be tied directly to him. Proving that the house builder and the ancestor are the same person isn’t at a 100% “fact” yet, but using some cluster research on one of the names of the marriage witnesses moves it that much closer. 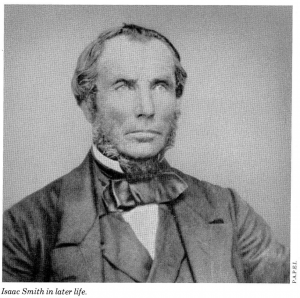 Isaac Smith, Jr. was born in Charlottetown in 1822 to Isaac Smith and Jane Smith. Isaac, the senior, was one of the most prominent builders, contractors and architects for the capitol region of PEI:

Wherever the future Fathers of Confederation looked in the Charlottetown of 1864, they would have been confronted with the work of builder/architect Isaac Smith. They conferred in a legislative building designed by Isaac Smith. On the same square, coming and going from the sessions which conceived the Dominion of Canada, they could observe an Episcopal church designed and built by Isaac Smith, and a round market house constructed by him. They were feted in a Lieutenant Governor’s residence designed and built by Isaac Smith. The very ship carrying the Canadian delegates had been guided into Charlottetown harbour by a lighthouse designed by—Isaac Smith. (Source)

It would only be appropriate to think that Isaac the son would follow in his father’s footsteps, and the fact that William Wright was is the same business also lends itself to the same conclusion that the witness to my ancestor’s wedding was in fact the son of the famous Isaac Smith. Taking it another step, the same magazine article the above quotation was taken from notes that Isaac Smith worked on several of his projects with one Nathan Wright. Finally, both William Wright and Isaac Smith were lay pastors in the Methodist Church. Could this Nathan Wright be my ancestor William’s father? Did the business (and religious and potentially personal) relationship between Isaac and Nathan directly resulted in the friendship of William and Isaac, Jr.? I, for one, would have to answer yes to both questions.

And now that I am thinking about it, how would have my ancestor Stephen H. Lewis–a much accomplished homebuilder in Somerville, Massachusetts, after emigrating from Nova Scotia–have met William’s daughter Laura when he was born and schooled in Five Islands, N.S.? Well, look at this line from his biography:

Mr. Lewis was employed for two years by an uncle at Prince Edward Island

Though proving Nathan and William to be father and son is still on the docket, there is little doubt in my mind that the Wrights who built many of the great structures of 19th century Charlottetown with the more accomplished Smiths are in fact relatives, if not my direct ancestors.

WHY IS THIS PLACE IMPORTANT?

The heritage value of 51 Prince Street lies in its role as one of the earliest wooden brick encased buildings in Charlottetown; its Georgian and Italianate influenced architecture; and its role in supporting the streetscape.

51 Prince Street was built for James Costello in 1872. While common now, wooden buildings with an exterior clad in brick were rare in the 1870s. Two factors indicate that the building was originally constructed of wood. When local newspapers described the construction of 51 Prince Street, only carpenter, William Wright was listed as being in charge. If the walls had been load bearing, a mason would have been employed. Also, the fact that the bricks are all laid on their sides and there are no bonding end bricks, indicates that the structure is actually wooden underneath.

The building at 51 Prince Street is Georgian influenced in style but also shows some Italianate influences. The Georgian style is one of the most common architectural styles on Prince Edward Island. It emerged from 18th Century Britain and was intent on expressing confidence, order and balance. Combined with the brick exterior of this building, the result was intended to impress. 51 Prince Street’s Georgian features include the symmetrical facade with five bays and a central doorway. The Italianate style was a more decorative style reminiscent of the Venetian arcades of the Renaissance period. Italianate influences can be seen in the slightly arched windows and the flat roof.

….The Adams family of New London owned this land from the 1820s into the twentieth century. During that time, in 1872, William Adams leased to Charles McFarlane the corner property for 21 years and Mr. McFarlane agreed “to erect a flat roof house”. It appears Mr. McFarlane reneged on the flat roof as, in 1875, builder William Wright constructed a house and shop for Mr. McFarlane, and it seems to be the gable roofed house there today.