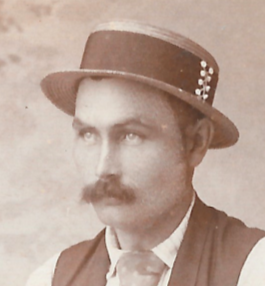 STEPHEN HENRY LEWIS–For more than four decades, Mr. Lewis was engaged in the business of carpenter and builder at Somerville, and during those years established a prosperous and prominent industry, which flourished until his retirement from active affairs in 1918. Industrious and enterprising, he had added many important real estate and insurance activities to his business and was recognized as a leader in the trade. His business has continued under the management of a son, Wilbur Fletcher, and to Mr. Lewis is the reward and comfort, the competence which his efforts have earned.

Enjoying music, he has won great admiration for his vocal talents and delights in entertaining with quartet and solo selections. He is the son of Charles Lewis of Colchester COunty, Nova Scotia, who was engaged in agricultural pursuit during his life and died at the age of seventy-two, and Katherine (Reed) Lewis, who lived to the venerable age of eighty-two. Mr. Lewis was one of the thirteen children, of whom five survive: 1. Mrs. Caroline E. Smith. 2. Andrew R. 3. Stephen Henry, of whom further. 4. Mrs. Esther Jane Webb. 5. David B.

Stephen Henry Lewis was born at Lynn, Colchester County, Nova Scotia, December 13, 1857, and attended the local public schools of his native district. Upon finishing his schooling, Mr. Lewis was employed for two years by an uncle at Prince Edward Island, and later returned to Colchester, where he was occupied as a carpenter for a number of years. At the end of that time, he come to the United States and settled in Roxbury, Massachusetts, where he stayed for a year and a half, after which at the age of twenty-seven he removed to Somerville, where he engaged in the carpenter business continuously since, and up to his retirement.

Some years later, Mr. Lewis formed a partnership styled Hudson and Lewis, carpenters and builders, which continued successfully for seven years, constructing many houses in the residential districts of the town. His work was of high standard, and he enjoyed a reputation for integrity and ability in his community which won for him great admiration of his associates and fellows. In 1910, Mr. Lewis took his older son, Wilbur Lewis, into the partnership, which became known as S. H. Lewis and Son, with office at No. 253 Elm Street, Somerville, Massachusetts.

In 1918, he retired from the commercial world, with the satisfaction of tasks able discharged and the construction of numerous buildings which stand as witnesses of his craftsmanship. Mr. Lewis enjoys great esteem in the community and delightfully gives musicales in which he joins as second tenor in quartet selections and in many solo renditions. He is a member of the Methodist Episcopal church, and actively interested in its welfare.

Mr. Lewis is a member of an ancient and illustrious family, tracing his ancestry to the early Lewises of Ireland and Wales, where descendants have gained much prominence during their many years of residence.