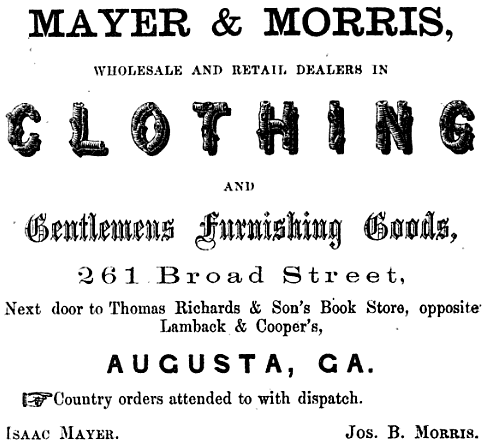 Isaac Mayer (b. abt 1818) came to the United States from Osthofen, Germany in about 1841. I suspect he came in through the Port of New York, though he may have arrived directly in Charleston, South Carolina. It was here that he likely met his future wife, Elizabeth R. Lambert.

Isaac’s parents were Feitel Mayer (1780-1866), born in Bechtheim, and Gütche Loeb (1778-1878), originally from Wallertheim. Feitel was the son of a Moses Mayer, while Gütche was the daughter of Moses Loeb.

The couple would be wed on June 16, 1847 in Augusta, Georgia. The wedding notice in the Augusta Daily Chronicle read “In this city, on the 16th inst., by G. F. Parish, Esq., Isaac Mayer, of Warrenton, Ga., to Miss Elizabeth R. Lambert, of Charleston, S.C.” Elizabeth and Isaac would have six children, including my 2nd great grandmother Eudora (“Dora”) Leah Mayer.

My research has found that Isaac was a man of means, a lawyer and a prominent member of the Jewish community in Augusta. He was a founding member of Augusta’s first temple, serving as its president from 1852 to 1854. He was also quite the importer of Rhine Wines from the fatherland, and had several business ventures involving the sale of clothing and dry goods, including one with his more well-known brother David Mayer, late of Atlanta.

Isaac held the rank of Private during the American Civil War. Capt. Gould’s Co., Georgia Infantry (Silver Grays). “Appears on a Muster Roll of the Silver Grays, a Company of Infantry organized in the City of Augusta, Ga., for local defence and mustered into the service of the Confederate States at Augusta, Ga., August 7, 1863, for six months, to service in August and its vicinity only.” Isaac enlisted December 23, 1863 and “Died April 29, 1864, of disease contracted while on duty.” His obituary, however, leads with “Major Isaac Mayer,” but it is unknown where this rank came from.

Isaac was buried in Magnolia Cemetery on May 1, 1864. His obituary reads: “Funeral Notice. The friends and acquaintances of Isaac Mayer and family are invited to attend his funeral from his late residence on Quality Range, tomorrow morning at 10 o’clock.”

After Isaac’s death, Elizabeth would move her family to New York where her son-in-law Jacob Kauffer hailed from.