Mr. and Mrs. Samuel D. Alfred celebrated their golden wedding at their home in Fairfax on Saturday night last. Quite a large number of guests participated in the celebration–mostly old inhabitants of the locality; the guests numbered about forty–and their average ages would be about seventy years old. An excellent supper was served and a thoroughly enjoyable evening spent, six of the seven children of the couple whose semi-centennial was being celebrated were present and took part in it, one only was absent, a married daughter residing in Iowa, whose health was not such as to permit her to be present. Mr. S. D. Alfred was for a long time one of the leading merchants of Fairfax, but has been out of business since 1865. Several valuable souvenirs of the occasion were presented to Mr. and Mrs. Alfred. 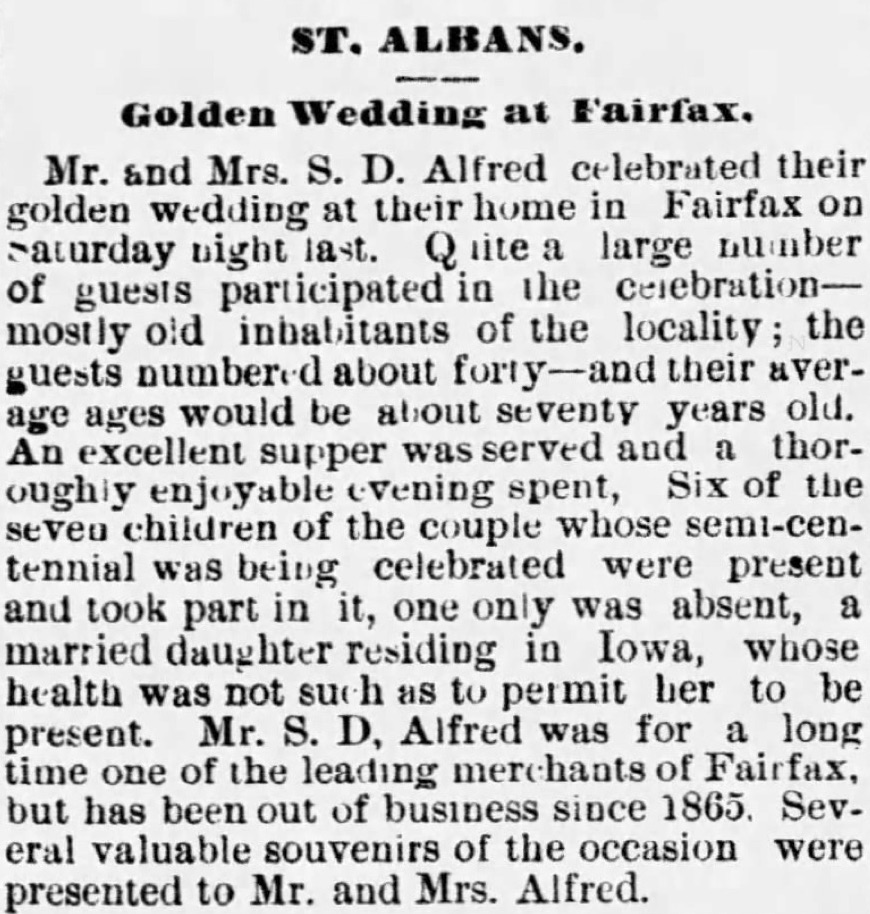 The name is of English origin, and the first one to settle in this country was Benedictus Alford, as the name then appeared, who made his home at Windsor, Connecticut. He was a sergeant in the Pequot war in 1637, a juror in 1643, and constable of his town in 1666, when a day of special thanksgiving was observed throughout the colonies. He was a member of the Windsor church. When his will was offered for probate in 1683, his estate was valued at two hundred and twenty-nine pounds, three shillings and six pence. This was considered a large amount in those days, and Mr. Alford was looked upon as one of the most prominent and influential citizens. He was married to Miss Jane Newton on November 26, 1640, and the following named children were born to them: Jonathan, born June 1, 1645; Benedict, born July 11, 1647; Josias, born July 6, 1649, who inherited the form granted to his father for services in the Pequot war; Elizabeth, born September 21, 1651; and Jeremy, born December 24, 1655.

Jeremy was the youngest son of Benedictus and Jane Alford, and the first name of his wife was Jane, who survived him and was administratrix of his estate in 1709. Her death occurred in 1715; nine children were born to them, namely: Benedict, Newton, Jonathan, Jeremy, Jane, Joanna, Elizabeth, Elizabeth (2) and Job Alford.

Job, the youngest son of Jeremy and Jane Alford, was born August 26, 1708, and about 1734 became one of the first settlers of Harwinton, Connecticut; his children were Job and John Alford.

John, youngest son of Job Alfred, was born September 4, 1738, and he was joined in marriage to Lydia Fellows; six children were born to them: Eunice, Polly, Joanna, Consider, William and Benjamin Alford. Benjamin, youngest son of John and Lydia Alford, was born March 26, 1769. He was married to Miss Elizabeth Chapin, and the following children were born to them: John B., who died in infancy; John B. (2); Samuel D., who also died in infancy; Samuel D. (2); and Elizabeth Alford. The father of these children was a resident of West Springfield, Massachusetts, subsequently removing to Westfield in the same state. He was engaged in the West Indies trade, and was a large dealer in ivory; on one of his return voyages he landed in Savannah, Georgia, to attend a sale of ivory, and contracted yellow fever, from which he died. His second son, John B., was united in marriage to Miss Hannah Hopkins, who bore him four children, namely: Elizabeth; Caroline; John B., who died in infancy; and John B. Alfred.

Samuel D. Alfred, youngest son of Benjamin and Elizabeth Alfred, was born June 14, 1804. He was eleven years of age when his father died; he remained at home with his mother and elder brother, assisting with the work on the homestead farm until he was sixteen years old, when he went to Hartford, Connecticut, and became an apprentice to a cabinet-maker. After acquiring a thorough knowledge of the business he worked as a journeyman in Batavia and Lansingburg, New York, and in the latter named city he was united in marriage to Miss Sally Willard, who was born September 30, 1805. Two children were born to them: Benjamin C. and Roxana, the latter of whom died in infancy. Mrs. Alfred died November 25, 1828, and mr. Alfred committed the care of Benjamin C. to the care of his grandmother, who resided in Westfield, Massachusetts. Mr. Alfred then engaged in the sale of clocks, traveling with his wagon as far north as Montreal, Canada. His business soon became so prosperous that he placed a number of traveling salesmen on the road, and he continued at this line of work until he formed a mercantile association with Almon Smith and Lucius Wheeler at Berkshire Center, Vermont. He retired from the firm in 1840, and removed to West Haven, Vermont, where he was in business for two years, subsequently removing to Fairfax, where he established himself in business, and continued to reside there until his decease. In 1865 Mr. Alfred retired, transferring his business to his son, John B. Alfred. Mr. Samuel D. Alfred was one of the prime movers in procuring the removal of the Newhampton Institution from Newhampton, New Hampshire, to Fairfax, Vermont. For many years after its removal he gave largely of his means and time to its support. It was one of the leading schools of that time. Mr. Alford gave all of his children a good and thorough education, and contributed liberally of his wealth to enable them to make a beginning in life. He was a man of the strictest integrity, and had the reputation of being the soul of honesty in all his transactions. Mr. Alfred, on November 25, 1832, married for his second wife Miss Polly Smith, who was born in Fairfield, Vermont, August 22, 1812. Ten children were born of this union, namely: Samuel D., Jr., who married Cerepta B. Freeman, and died at the age of forty-eight years; Pamelia Ann, who is still living; Mary Celinda L., wife of Charles E. Fisher; Sarah M., wife of Elbridge D. Richardson; Cromwell B., who married Jane Roberts, and died at the age of forty years; Elizabeth C., who died at the age of five years; John B., who married Susan A. Bradley; Almon S., who married Lucy A. Ives; Chauncey Chapin, who married Ann Chase Hunt; and Frank E. Alford.

This genealogical sketch is taken in its entirety from Genealogical and Family History of the State of Vermont: A Record of the Achievements of Her People in the Making of a Commonwealth and the Founding of a Nation by Hiram Carleton, published in 1903. (Source) The information is provided as written in the book with the disclaimer that the book has no source information or footnotes. I can vouch for most or all of the information after Benjamin Alfred and Elizabeth Chapin, while the information regarding prior generations up to Benedictus Alford has not be verified.

ALFRED.–Samuel D. Alfred was born at Springfield, Mass., June 14, 1804, and died at Fairfax May 5, 1889. November 25, 1832, he married Miss Polly Smith, who survives him. His parents died when he was quite young. He learned the cabinet-maker’s trade, which he followed until his marriage, when he went into the mercantile business at Berkshire Center, and later at West Haven. In June, 1842, he moved to Fairfax, where he remained in active business until the spring of 1865, when he sold his business to his son John. He had ten children by his present wife and two by a former marriage. Seven are still living, with nineteen grandchildren, three of whom are married. Mr. Alfred was a very strict man. In business his goods were all marked, and he never varied from the price. The youngest child could be send to his store and was sure to get the goods as cheaply as the parents could. Said one who served a three years’ apprenticeship in the mercantile business with Mr. Alfred. “When boys we used to think that Mr. Alfred was an awful mean man to work for. But I now know that the three years I lived with him were worth more to me than all the rest of my schooling. I feel that to Mr. Alfred I am indebted for all I am.” Every apprentice who served with him has turned out a successful business man. Mr. Alfred knew the value of good credit. In 1857, when everybody was failing, his oldest son was in business in Illinois. In the fall he wrote that he would not come East, as he could not meet his bills. Mr. Alfred wrote his son to send on a list of goods that he wanted, with what money he could raise. He then went to his own creditors in New York, secured an extension, which was readily granted, after buying what goods he wanted. He then went to his sons creditors, paid his bills and ordered his goods, thus giving his son a high rating, which he always maintained. It was a great wonder to the New York merchants how a western man could meet his bills, and they never knew how it was done. The funeral services were held from his late home Thursday, May 9, Rev. Henry Crocker officiating, with remarks by Rev. J. G. Loramer, who said that he came not as a minister but out of respect to one to whom he owed a debt of gratitude for assistance in getting his education. Mr. Alfred will long be remember as a true friend to the right, not only by his family, but by a large circle of friends also.

The obituary for my 3rd great grandfather–Samuel Dwight Alfred–in the St. Albans Messenger, May 15, 1889 (page 3):

Samuel D. Alfred was born in Springfield, Mass., June 14, 1804. When he was quite young his parents removed to Westfield. At the age of eleven years he lost his father, who was engaged in trading between New York and the West Indies. At 10 he went to Hartford, Conn., where he served an apprenticeship as a cabinet maker, at which trade he worked in Connecticut and New York till 1832, when he returned to Berkshire Centre, where he engaged in the mercantile business and remained for several years. From there he went to West Haven, where he remained only two years. He moved to Fairfax in June, 1842. He remained active is business until the spring of 1865, when he sold out to his son, John B., since which time he has given his time in looking after his farming interest and visiting his children settled in different parts of the West.

Mr. A. was a man very positive in his convictions, whether in regard  to his own or public interests. In business transactions he dealt with the rich and poor alike. A child sent to his store was treated with the same consideration as the most honored citizen. He was interested in education , not only in the common school, but in higher education, as was shown in his efforts combined with so many others to establish and maintain the new Hampton Institute. He always manifested great interest in the welfare of his children, giving them every opportunity for improvement and aiding them in every way by his counsel and advice so long as he lived, and by them will be greatly missed. He was twice married; in 1825 to Miss Sally Willard of Lansingburg, N. Y., who died 1828; in 1932 he married Miss Polly Smith, who, with 7 of their children, still survives him, and with the exception of one all were present at his funeral, which was attended from his late home (which he had occupied for 46 years) Thursday, May 9th, Rev. Henry Crocker officiating, assisted by Rev. J. G. Lorimer, an old friend of the family.