The obituary for my 3rd great grandfather–Samuel Dwight Alfred–in the St. Albans Messenger, May 15, 1889 (page 3):

Samuel D. Alfred was born in Springfield, Mass., June 14, 1804. When he was quite young his parents removed to Westfield. At the age of eleven years he lost his father, who was engaged in trading between New York and the West Indies. At 10 he went to Hartford, Conn., where he served an apprenticeship as a cabinet maker, at which trade he worked in Connecticut and New York till 1832, when he returned to Berkshire Centre, where he engaged in the mercantile business and remained for several years. From there he went to West Haven, where he remained only two years. He moved to Fairfax in June, 1842. He remained active is business until the spring of 1865, when he sold out to his son, John B., since which time he has given his time in looking after his farming interest and visiting his children settled in different parts of the West.

Mr. A. was a man very positive in his convictions, whether in regard  to his own or public interests. In business transactions he dealt with the rich and poor alike. A child sent to his store was treated with the same consideration as the most honored citizen. He was interested in education , not only in the common school, but in higher education, as was shown in his efforts combined with so many others to establish and maintain the new Hampton Institute. He always manifested great interest in the welfare of his children, giving them every opportunity for improvement and aiding them in every way by his counsel and advice so long as he lived, and by them will be greatly missed. He was twice married; in 1825 to Miss Sally Willard of Lansingburg, N. Y., who died 1828; in 1932 he married Miss Polly Smith, who, with 7 of their children, still survives him, and with the exception of one all were present at his funeral, which was attended from his late home (which he had occupied for 46 years) Thursday, May 9th, Rev. Henry Crocker officiating, assisted by Rev. J. G. Lorimer, an old friend of the family. 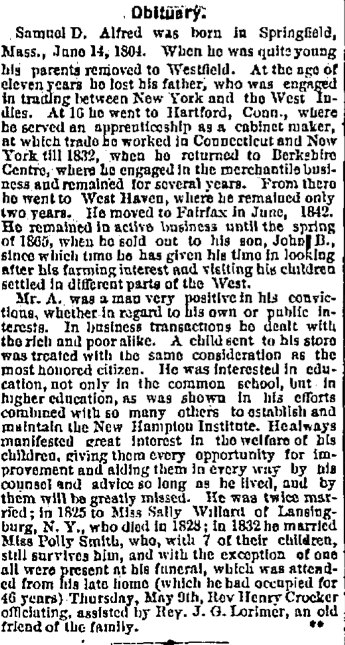