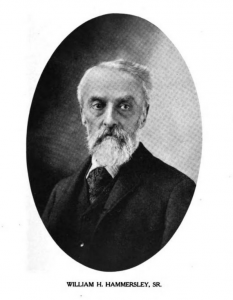 In the death of William H. HAMMERSLEY, Sr., Lake Geneva and vicinity lost one of its most valued citizens. The latter part of his life, covering over forty years, was spent here and during that time he took an active part in the general progress of the county. He belonged to that type of progressive business men who believe in carrying the Golden Rule into their everyday affairs. Always quiet and unostentatious in manner, he nevertheless left a strong impress of his individuality upon all whom he met. He had the happy faculty of seeing the beautiful things of the world, enjoyed nature, loved flowers, appreciated noble traits in mankind and had an optimistic outlook on life, so that to know him was to respect and admire him for his exemplary characteristics.

Mr. HAMMERSLEY was born January 8, 1832, in Hanley, England, and was the son of William S. and Ann (PEDLEY) HAMMERSLEY. His paternal grandfather, Ralph HAMEMRSLEY, died in England when about seventy-five years old. He was a man of strict integrity, a consistent Christian and for many years was a deacon in the Congregational church.

William S. HAMMERSLEY, father of the subject, was a manufacturer of chinaware in England, which business he followed until 1843, in which year he emigrated to America, locating in New York city, where he became an importer of china and earthenware. In 1855 he moved to Flint, Michigan, and retired from business, and now he and his wife are both deceased; they were members of the Presbyterian church. They were the parents of the following children: Ann Jane, widow of Henry C. WALKER, lives in Ann Arbor, Michigan; William H., of this review; Lucilla Oakley is the wife of Edward M. MASON, of Girard, Kansas;
Fannie is the wife of W. B. BUCKINGHAM and lives at Stevens Point, Wisconsin.

William H. HAMMERSLEY, Sr., was twelve years old when his family brought him to the United States. He had attended school in his native land, and soon after coming to New York he began clerking in his father’s store. When he reached manhood he became associated with his father in business and so continued until 1853. On October 6th of that year he was united in marriage with Elizabeth S. SMITH, daughter of Henry and Phoebe Ann (BARKER) SMITH. She was born in Erie county, New York, near Buffalo, and in her early life the family move to New York City, where she lived until her marriage. Her parents had come from Saybrook, Connecticut, to New York state and settled at Butterworth Falls (correction: Buttermilk Falls, now Highland Falls), near West Point, subsequently moving to Erie county, where Mrs. HAMMERSLEY was born.

In 1863 Mr. HAMMERSLEY and family came to Walworth county and lived a year on the farm. He then went to Lake Geneva and went into business as a dealer in drugs, books and stationery. He had a well stocked store and enjoyed a large trade. In later years he also engaged in the floral business, having charge of the Lake Geneva Floral Company. He was very successful as a business man and was known to all with whom he had dealings as a man of the highest integrity.

Politically Mr. HAMMERSLEY was a Republican and he took more than a passing interest in public affairs, and held a number of township offices, such as township clerk, and he was chairman of the board of supervisors.

William H. HAMMERSLEY, Sr. was a Royal Arch Mason, a prominent member and officer of the Congregational church, and an earnest Christian. He was one of the prominent and influential men of the southern part of the county, being a man of steadfast purpose in all the relations of life, whether religious or secular, conscientious and faithful to every trust. He was summoned to his reward on April 14, 1906.