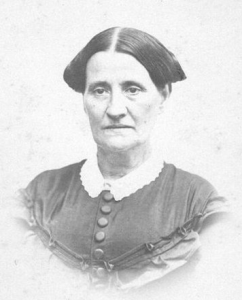 I had long thought that the parents of Polly Smith, my 3 GGM, were Zadoc Smith and Mary “Polly” Babcock. I believe this parentage originally came from Sons of the American Revolution Membership Applications, 1889-1970, and therefore should have been treated as such. However, I was a young man trying to go back as far as possible, so onward I went with this assumption (which conveniently led to an American Revolution patriot ancestor). This parentage is also part of the genealogical file that was prepared by a relative, so it does carry some credence. However, I had some doubts about it in the last year or so, and so the following discovery is intriguing to say the least.

However, I recently found this listing on Find-a-Grave. Her parents are clearly shown here to be Ira Smith and  Obedience Martindale. With Vermont records pre-1850 being what they are, I have had little success in the brief (read: Googling) research I’ve done into the family. And, as always, the surname “Smith” doesn’t lend itself to helping my efforts.

This post is another “open” post that will be updated as I am able to find out more details. It is also open in the hopes of someone with definitive proof to post and help a brother (or, more accurately, distant cousin) out!

UPDATE (8/22/14): In reviewing the book Isaiah Babcock, Sr. and his descendants
By A. Emerson Babcock, I noticed that Elias Babcock and Huldah Kinne (or Kenney) had several children, including a “Polly” born in Dalton, MA 29 Jun 1782. However, this Polly is said to have married a “Robert Smith” in Sandy Lake, NY before settling in Sheldon, VT. This would contradict the SAR application showing this Babcock marrying a “Zadoc Smith.”

William H. Hammersley, Sr., is engaged in business in Lake Geneva as a dealer in drugs, books and stationary. He has a well-appointed store, filled with a good stock, and since 1865 he has engaged in business along this line. He is now recognized as one of the leading merchants of the place, and it is with pleasure that we present this record of his life to our readers.

A native of England, Mr. Hammersley was born in Hanley, Staffordshire, on the 8th of January, 1832, and is a son of William S. and Ann (Pedley) Hammersley, who were also natives of the same country. The paternal grandfather, Ralph Hammersley, died in England at about the age of seventy-five years. He was a man of strict integrity, who lived a consistent Christian life, and for many years served as Deacon of the Congregational Church, with which he held membership. The father of our subject was a china manufacturer in his native land, and carried on business along that line until 1843, when he emigrated to America. Locating in New York City, he became an importer of china and earthenware. In 1855, he removed to the West, and, settling in Flint, Mich., retired from active business. He and his wife were members of the Flint Presbyterian Church, and both are now deceased. They were the parents of four children, a son and three daughters: Ann Jane, widow of Henry C. Walker, who is living in Ann Arbor, Mich.; William H.; Lucilla Oakley, wife of Edward M. Mason, of Girard, Kan.; and Fannie, wife of W. B. Buckingham, who is living in Stevens Point, Wis.

When a lad of twelve summers Mr. Hammersley of this sketch bade adien to friends and native land, and came to America with his mother and the other children of the family. His education was acquired mainly in England, for soon after coming to America he served as clerk in his father’s store. Having remained under the parental roof until he had attained to man’s estate, he then became associated with his father in business and the connection was continued until 1855. The following year he came to the West, and lived in Flint, Mich., until 1858, when he returned to the Empire State, and there spent the succeeding five years of his life.

On the 6th of October, 1853, Mr. Hammersley was united in marriage with Miss Elizabeth S. Smith, a daughter of Henry and Phoebe Ann (Barker) Smith. Their union has been blessed with three children: Grace C., wife of C. D. Gilbert, by whom she has a daughter, Lizzie; Charles H., who married Miss Ida E. Gilbert; and William H., who married Miss Emma M. Seymour. The latter have two children, Seymour and Henry.

In 1863, Mr. Hammersley came with his family to Walworth County, and for a year resided upon a farm. He then came to Lake Geneva, where he has made his home for thirty years, devoting his entire time and attention to his business interests. There is only one merchant now carrying on operations in the town who was here at the time of Mr. Hammersley’s arrival. He has therefore witnessed the growth and development of the place, and his fellow-townsmen say that he has ever borne his part in the work of advancement and progress.

Both Mr. and Mrs. Hammersley hold membership with the Congregational Church, and take an active interest in church and benevolent work. In his social relations he is a Royal Arch Mason. In politics, he is a Republican, and has held various township offices. He has been Chairman of the Town Board of Supervisors, and was also Township Clerk. He is true to every trust reposed in him, whether public or private, and is one of the valued and highly respected citizens of Lake Geneva.