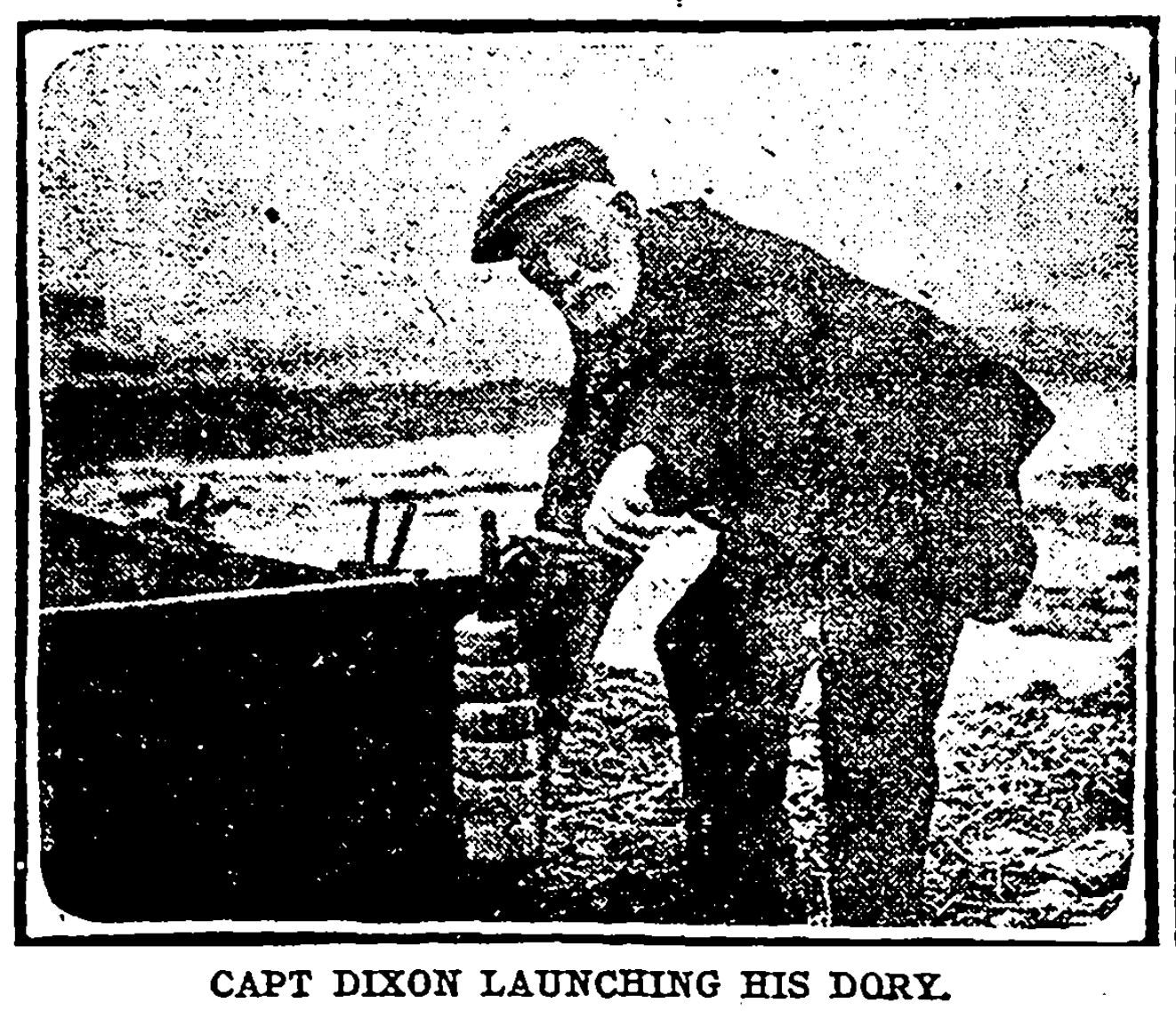 Despite his age, Capt Dixon, day after day, in storm or good weather, tends 150 lobster traps, work that takes the strength of a young and hard man, as well as one who can endure and take no account of numerous plunges into the raging sea after a heavy-laden trap has pulled him overboard.

Who is there in New England that beat the record of Capt Comfort Dixon, 92 years old, and still an active and alert lobsterman?

“I have been a lobsterman for over 30 years,” say Capt Dixon, as he removed his century-old pipe and spat on the greensward in front of his trim little house just back from the Point. “I have 150 traps that are worked by my boy and myself. The boy, who is at home, I mean. My other boy, for I have two of them, is in the Regular Army; has been for 25 years, and is about to retire. He will live in Plymouth, so I will have him practically home again.

“The boy at home now is a member of the life-saving crew at the Point and during his spare time he helps me pull the traps. He comes out in the Fall on a pension, as he has worked his allotted time as a lifesaver in a most hazardous position.

“When I was a boy I worked in a cotton mill in the Western part of the State and knew nothing at all about the sea. I took up a sea-faring life because I loved it and do now. I was on coasters for 15 or 20 years before and after the Civil War.

“I took up lobster catching about 30 years ago and have had many exciting times capturing these pets. I have been thrown overboard by huge lobster catches many times, but these small things don’t count for much in a seafaring life. The lobster catch has fallen off much since I went into the business. At that time they were plenty and the traps were most always full when we pulled them, which was liable to be every day.

“The prices, too, have increased very much. Why, in olden days we used to get six cents apiece for each lobster, large or small. Now they sell for 30 to 35 cents a pound. There used to be no limit by law as to the size, and a little lobster, which we are now obliged to throw back, was worth as much then as a big one.

“The biggest lobster I ever caught weighed 13 pounds. It measured about three feet long with claws outstretched and was nearly 10 inches in width. You don’t see such monsters now. They run much smaller on an average and are not nearly as plenty. On this coast the lobster fishing is running out and many thousands will have to be put here to bring the fishing up to what it was years ago.

“How did I come to take up a seafaring life? I don’t know. I often thought of that myself and I guess I was the first of the family to follow that life. My father was a hatter by trade and I guess never was in a row boat in his life. My only happiness is to be near the water. It is life and health to me. If I lived in the city I would surely miss the sea and sand, and wind and the smell of the salt water. It is not pleasant weather all the time, of course, but I love the squalls and gales and the lashing of the waves as much as I do a smooth sea.

“When I was at sea on coasters, I would come home from a voyage and make up my mind never to go to sea again. That feeling would last a few weeks and then I would be off to sea again. I never could keep away from it. I guess I should have to give up my work soon, however, as my legs are getting a little weak and I guess I have earned a rest, after so long a time.

“You know there is one thing I have noticed for several years. Our Summers are getting shorter and our Winter longer. Sometime, I expect, this climate of New England will resolve itself into about a month of Summer and the rest of snow and storms and cold weather. Then I guess our New England people will have to move further South. This will not come in my day, of course, but some of our young people will surely see that time.”

Capt Dixon is the youngest old man in the world. He has a ruddy face, perfect hearing, is a good talker and simply loves now to rover over the sand dunes and gaze for hours on the sea, which he loves. His strength is shown by the fact that when the Globe man’s motor car got stuck in the sand, Capt Dixon was the first to suggest that he get out and push. He did, too, and half the reason for this story being printed in the Globe instead of in China, as it seems the car must go at one time, is the great strength still possessed by 92-year-old Capt Comfort Dixon, the oldest lobsterman in New England. 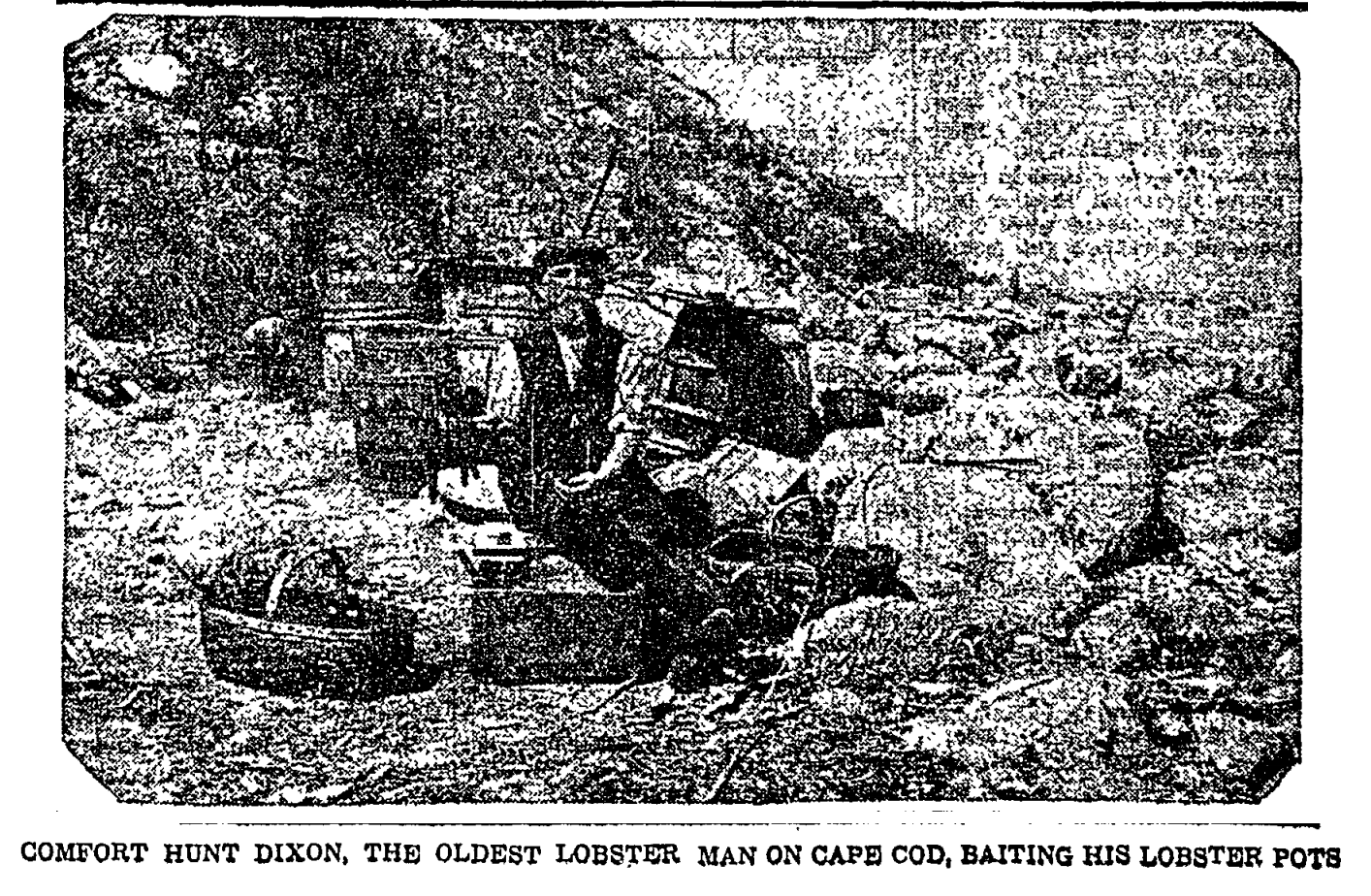