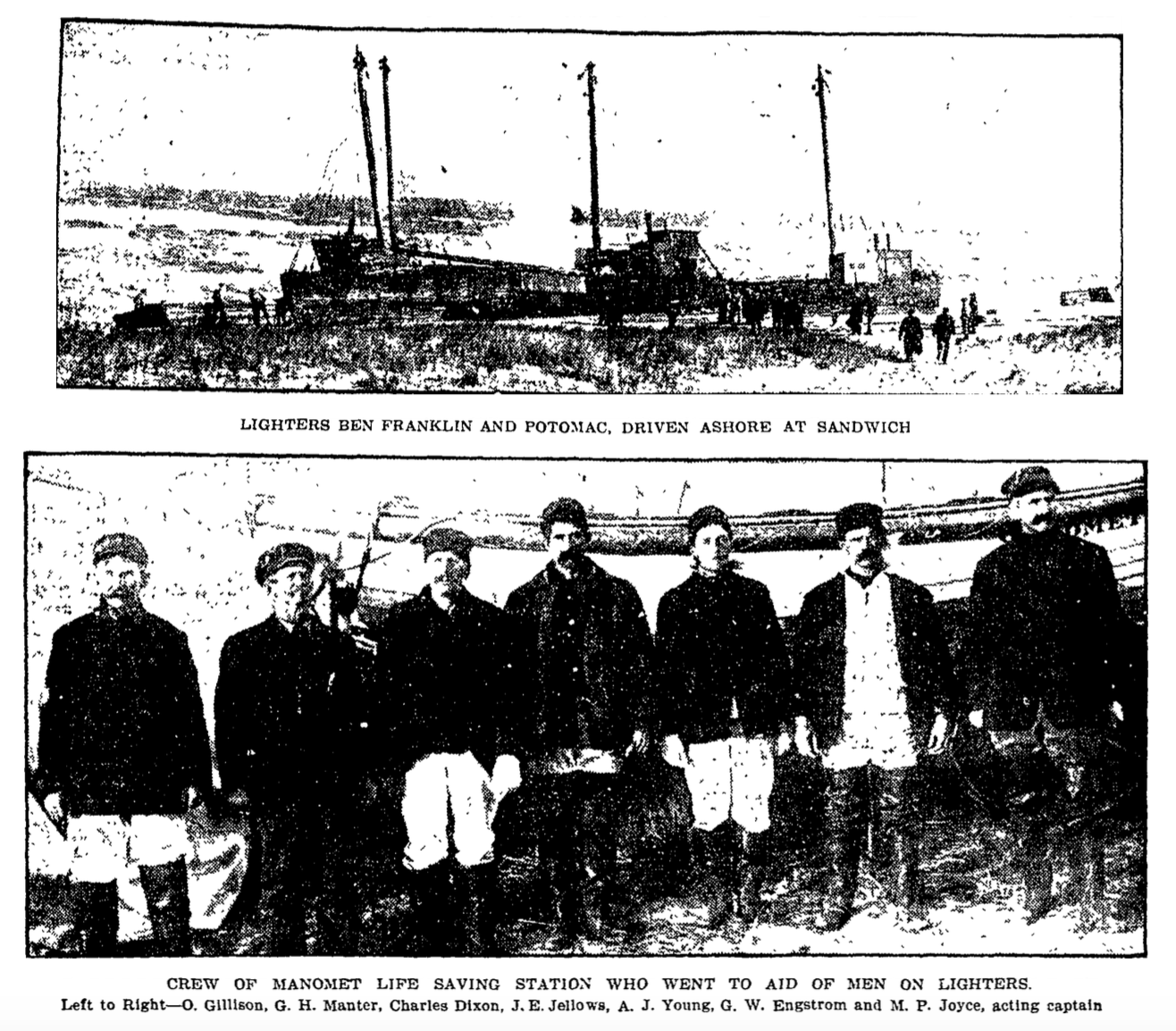 SANDWICH, Nov 9–Relying upon the weather report yesterday afternoon, according to Capt Gilbert, came near costing the lives of 23 men employed in building the big breakwater at the entrance to the Cape Cod canal today. Two big lighters were driven ashore and piled high on the beach. They will be a total loss.

The tug Sarah J. Weed, after a fearful experience in the bay, managed to work her way into Provincetown harbor, and the four schooners of the Gilbert company rode out the gale in safety.

One of the schooners, the Elizabeth Gilbert, dragged her anchor for more than a mile, and tonight is riding out the gale near the breakwater, with the revenue cutter Gresham standing by to render assistance should it be necessary.

Two life-saving crews, the Manomet and Wood End, came to the assistance of the men of the lighters, while hundreds of citizens and boatmen stood helpless on the shore watching the riotous seas tear the lighters to pieces.

The two lighters, the Ben Franklin and the Potomac, came into the bay yesterday morning from Plymouth to unload granite from the schooners, and all day yesterday they worked taking stone out of the Elizabeth Gilbert.

Late yesterday afternoon Capt Gilbert, not liking the weather conditions, although the wind was blowing off shore, called up the weather bureau office in Boston and asked for today’s forecast. He received word that light westerly winds would prevail along the coast today and accordingly he kept the lighters at anchor alongside the breakwater with the tug Weed standing close by.

All hands turned in at an early hour, but before midnight the wind suddenly came in from the northeast. The men were called on deck before daylight and preparations were made to transfer the 18 men on the lighter Franklin to the Potomac, the stronger of the two.

Soon after 7 o’clock it was seen that the lives of the men were in great peril and distress signals were run up in the rigging. The seas at this time were breaking over the lighters and sweeping them from stem to stern, while the men could be plainly seen from the shore holding on for their lives.

The repeated distress signals sounded by the siren whistle on one of the lighters soon brought hundreds to the beach, but all were powerless to render help.

Word was at once sent to the Manomet life-saving station, nearly 16 miles distant, and the veteran surf fighter, Capt Rogers, and his crew started overland with their surf boat and beach cart. Two hours were consumed getting horses to cart the heavy apparatus, and it was nearly five hours from the time that the crew started before their boat reached here.

Meantime Capt Bowley and Lieut Ridgely had been informed of the situation by the Globe correspondent, and they ordered Capt Bickers and his crew of the Wood End station at Provincetown, nearly 30 miles distant, to the scene The Gresham was also reached by wireless.

Before the Manomet life savers reached here the big lighter Franklin parted her moorings and was driven ashore, but they arrived in time to help the men on the lighter Potomac that was piled up alongside the Franklin.

The Gresham arrived in the bay at 3 o’clock, soon after Capt Bickers and his crew made a record-breaking run across the bay. Capt Bickers ran his power life-saving boat alongside Elizabeth Gilbert that was dangerously near the shore and offered to take the crew off, but they said that the anchors were holding and that they would stand by their vessel.

Capt Bickers then went alongside the Gresham, reported the facts and started in the teeth of the gale back across the bay to his station. The Manomet life saver were on the beach when the Gresham steamed in close to the breakwater and surfman Joyce signaled for her to stand by the inshore vessel. The Gresham at once put a boat out and sent a crew alongside the Elizabeth Gilbert and later came to an anchor close by the schooner.

Capt George A. Dean of Boston, who has charge of the work of unloading the granite from the schooners, told the Globe correspondent that the men on the lighters had a fearful experience this forenoon.

They thought that help would never come and that every moment the lighters would swamp. While transferring the men from the Franklin she broke adrift and raced ashore and later when it was feared that the Potomac would go down she was cut adrift and was driven ashore along the Franklin.

Both lighters are being battered by the seas and will probably break up.

The schooner Elizabeth Gilbert has three anchors out, including a 12,000-point fisherman’s anchor that it is believed will hold her until the Gresham can tow her out into the bay tomorrow.

The small boats on the lighters were swamped while being launched. The lighters are valued at $12,000, with no insurance.

The crews are quartered in the village tonight and tomorrow they will trip the wrecked craft. All the men aboard the lighters excepting four belong in Boston.

The cook of the Franklin suffered minor injuries, as did the cook of the Potomac, as they were being pulled out of the surf. Capt Dean says he will have other lighters here in a few days and that the work will go on at once.

The pontoons used in the canal construction were cast ashore today, and the beach for a half mile is strewn with wreckage of all kinds.