Among the seven children of Andrew and Calma was Charles H. Gilbert, born in New York in 1826 or 1827, and moved to Wisconsin with his family.

Charles died of illness during the Civil War on September 5, 1864, in Cario, Illinois. He was a lieutenant in Company F of the 40th Wisconsin Infantry. Sadly, his wife Eliza Day would also die young, passing on February 16, 1868 at the age of 39. Husband and wife are buried at Spring Grove Cemetery.

Following the death of their parents, Carrie and Harry Gilbert were adopted by Eliza’s sister Betsey and her husband R. G. Bennett. Tragically, both Carrie and Harry would would die young as well, neither living to be as old as their parents at the time of their deaths. The couple also had one birth son, Griggs, “a most excellent youth,” who would die at age 16 from diphtheria. According to the Centennial History of the Town of Nunda, “[t]he entire family lived but a few years,” and Carrie, who graduated Nunda Academy, wrote “The Mission of Difficulty,” an essay that was full of excellence and appreciation for those who had made themselves victors of circumstances.

The only child of Charles and Eliza to survive to adulthood and start a family was Clarence Day Gilbert. You can read about his life HERE.

[The 40th Regiment Wisconsin Volunteer Infantry was an infantry regiment that served in the Union Army during the American Civil War. It was among scores of regiments that were raised in the summer of 1864 as Hundred Days Men, an effort to augment existing manpower for an all-out push to end the war within 100 days. The 40th Wisconsin was organized at Madison, Wisconsin, and mustered into Federal service on June 14, 1864. The regiment was mustered out on September 16, 1864. The 40th Wisconsin suffered 1 officer and 18 enlisted men who died of disease, for a total of 19 fatalities. Source: Wikipedia] 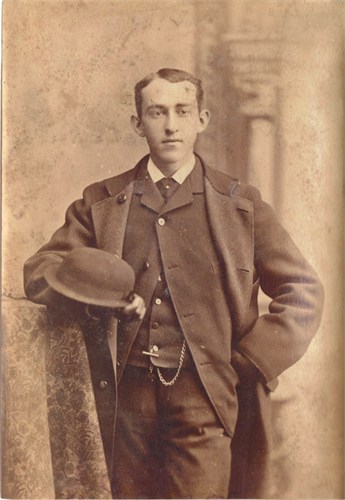 CLARENCE D. GILBERT, an enterprising grocery merchant of Lake Geneva, has the honor of being a native of Walworth County. He was born in the town of Walworth, September 21, 1852, and is the eldest of three children whose parents were Charles H. and Eliza (Day) Gilbert. The other two, Carrie and Harry, however, are now deceased.

The father and mother were both natives of the Empire State, and the former followed agricultural pursuits throughout his life. About 1850 he emigrated westward, locating in Walworth County, Wis., where he purchased a farm of one hundred and sixty acres. This he cultivated and improved until after the breaking out of the late war, when he responded to the country’s call for troops, and enlisted in the Union service as First Lieutenant of his company. Prior to this he was Captain of a company of militia at Walworth Corners for about two years. In 1864 he was taken sick, and died at the age of thirty-eight, while on his way home. His wife survived him for about two years.

The paternal grandfather, Andrew Gilbert, followed milling in the East until 1850, when he too came to the Badger State, where, in connection with his son Charles H., he engaged in farming. He served as a soldier in the War of 1812, and was ever a loyal and faithful citizen. His death occurred in Delavan, Wis. , where he spent the last three years of his life. He had reared a large family, and reached the allotted age of three-score years and ten. The maternal grandfather was a native of New Hampshire, but lived for many years in the East.

In taking up the personal history of our subject we present to our readers the life record of one who is widely and favorably known in Walworth County, for here he has spent the greater part of his life. In the usual manner of farmer lads his early boyhood days were passed, but at the age of twelve he left the farm and spent two years in Delavan. He then removed to Lake Geneva, where he completed his education, after which he embarked in the milling business, carrying on business along that line until twenty- two years of age when he went to Red Wing, Minn. There he engaged in the same business for a period of five and a-half years, and on his return to Lake Geneva he embarked in the grocery business, which he has followed continuously since 1881.

On the 22d of October, 1874, Mr. Gilbert was united in marriage with Miss Grace Hammersley, daughter of William H. and Elizabeth (Smith) Hammersley. They have one daughter, Lizzie. Their home is a pleasant residence and is noted for its hospitality. Mr. Gilbert is a Republican in politics, and his wife is a member of the Congregational Church. In this community they have many friends, and their many excellencies of character have gained them the high respect of all.