In terms similar to these we are accustomed to record the passage of all immortals through the shadowy portals which open from earth into the Infinite.

The brief words, he was born, he lived, he died, sum up all human history. The joy which hails the newly born spreads little beyond the household. The mature life may make its energies felt upon the pulses of a world. But whether that life belong to the quiet and unpretending citizen, to the eloquent statesman, or to the mighty conqueror, yet, when the curtain lifts upon the third act of the drama, the shadows of the tomb seem to reach out to darken and obscure. The busy energies of the life in the world contract the narrow limits of the sick chamber. One by one the chords which unite to the busy multitude outside are severed. The silent footfall and sad faces of a few true friends take the places of the joy of life’s morning and the noise and glare of its noon. A mighty angel spreads the shadow of immortal wings above the place, and the great and the humble alike, pass out into the invisible light, even more quietly than they entered the world. Then that world sees in a paper, or hears from the tongue of a bell, or the funeral music of the slow procession, or beholds among the black plumes a hearse; the last words of life’s common history–he died.

The record today is of “an Israelite indeed, in whom there was no guile.” One of that ancient race whose Moses and Joshua, and Gideon and Saul, are prouder and older names than Alexander and Hannibal, Napoleon and Washington.–Whose Oracles, speaking from the Mercy-sect, and beneath the extended wings of the Cherubim, are of authority now, while the groves of Greece, the Delphie Mysteries, the auguries of Rome, as well as those older rites which the Chaldese learned beneath the stars that looked on Babylon, or the Egyptians practiced in the chambers of the Pyramids, only live in tradition and fable.

The race that have preserved amid wars and captivities, the primal history of the world, and the first revelations of its Creator; whose long and authentic genealogies put to shame the boasted ancestry of the noble earth, who are proud to trace their blood from such recent things as a Crusade or Norman invasion; whose deeds of arms live upon the painting and the marble, by which Syria, Egypt and Rome strove to bride the old tomb-builder, Time, into marking his path with something besides dust and decay; whose prophets learned of the future from God; whose Seers talked with Jehovah and his angels; whose poets taught Chilton and Homer to sing; whose kings begun with such names as David and Solomon; whose city was Jerusalem; whose sanctuary was the Temple; whose law is the basis of all civilized codes; and who, even now, although dispersed, persecuted, oppressed, furnish historians, warriors and statesmen in all lands; and who, strange to tell, are most hated by those who swear on their Holy Book, and worship a God who was born of their blood.

Isaac Mayer was a Jew, and so were David and St. Paul, the Apostle Peter, the historian Josephus, and the incarnate object of Christian worship, Jesus Christ.

Born in that fatherland from whence come the most successful agriculturists of the new world, he was thoroughly German; delighting always to tell of its beautiful cities, its blue rivers, and vine-clad hills; although always a good and true citizen of this adopted country, yet never giving up the hope of returning to the land of music, and pipes, and wine.

A successful importer of the wines of the Rhine, and prominent for years among the business men of Augusta, esteemed among those companions of the Holy Royal Arch, who called themselves Masons, it is of little use to tell who or what he was to a community in which he lived and died.

A keen sympathizer with the South in the revolution called secession, he was among the early volunteers, and when Brigadier General Capers was in command of the Second State Brigade at Savannah, our friend accepted the appointment of Brigade Commissary, and wore worthily the stars of Major.

During a long illness he was always rational, always patient, always the kind husband and father, and friend he had lived, sanctifying with a pious death the life of generous usefulness.

The writer did not see him die, but in the last visit he whispered, “They have sent for me and I must go.” The parting with loved ones, which made his lips quiver then, is over now, and brighter skies than those of this own loved Germany bend above him now. He drinks from the sweeter waters than the health giving springs of that distant home; sees richer verdure than the vineyards of the Rhine, and the angels know grander songs than those of the immortal composers of the home of music. The procession of citizen soldiery, brethren of the Mystic tie and assembled friends, was not so grant, and far more sad, than the escort of glorious spirits, who sang through the fields of air of a death on earth and a birth in heaven; who led him to that lodge, that needs no keystone and no pillars into the presence of that only Grand Master of the universe, whose Mastership can never be recorded as Past.

They “sent” for you old friend; the sickness was but to sever the strong chords of mortality. They waited in the chamber and smiled a welcome while others wept at parting; they opened the doors of pearl, whose golden hinges turn so softly that mortals never hear them; they led you through into the ineffable light beyond; and we, who know you are gone, and who miss you so much, will plant flowers above your dust; and when they bloom will dream among their fragrance of the home you have gone to, where creeds are forgotten; where wars are no more; where the Jew and the Gentile may meet in the Holy of Holies. 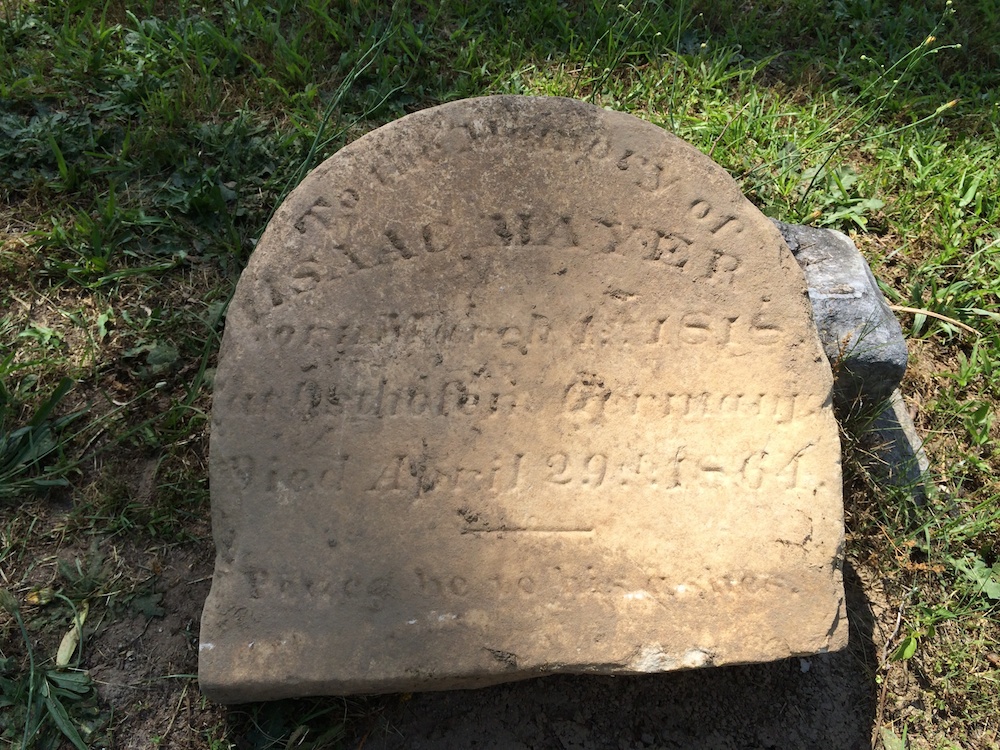 Kind and generous people have become somewhat of a rarity, but they are truly a blessing when they are a part of your life. One of these people is a student at Gordon-Conwell Theological Seminary named Preston. He goes to my church, attends the same Bible study as me and who hails from a town near Augusta, Georgia.

When I found out that he was near Augusta, I mentioned to him my ancestor Isaac Mayer (3rd great grandfather) being from that area, and that I had recently found where he was buried – Magnolia Cemetery. Not only did he know where that was, but offered to try and find the headstone for me next time he went home. Here is some of what he wrote to me after he returned from this genealogical scavenger hunt on my behalf:

I’ve never actually been to that cemetery before, but it is a historical place so I took a lot of pictures just for fun. It turns out I have a few relatives buried there, though I don’t know where they’re buried.

About halfway through you’ll see I stumbled upon the Jewish plots (thanks to the map you sent me). The grave stones were interesting, most of them had some Hebrew on them. I haven’t translated any of it. It would be difficult for me since the vowel markings aren’t there, or put another way, the text is “unpointed.”

It took me a long time to actually find the grave, because Mayer is not a common family name in the Jewish plots at that cemetery, at least from what I saw. In fact, I only found two grave stones belonging to the Mayers, one of which is Isaac’s as best as I can tell

So you’ll see two Mayer grave stones in the last part of the album. The rectangular one says

The other gravestone belongs to Isaac himself. I almost didn’t even see it because it had broken and was resting face down, but I ended up flipping it over and cleaning it off. And sure enough, there it was. This is the best that I can make of what the stone says

You’ll see on the back side some Hebrew text engraved there. I haven’t looked at it too closely, but I can perhaps find out what it says later if you want.

So, not only has my friend made this remarkable personal connection for me with the final resting place for my ancestor with pictures, but he has also helped me discover for the first time my ancestor’s hometown in Germany! Osthofen, Alzey-Worms, Rhineland-Palatinate, Germany is where he was born, and it would appear that the Family History Library in Salt Lake City has some extensive church and civil records for this region. One scavenger hunt, as expected, has led to another! However, with Isaac being Jewish, it is unclear whether or not any records remain. The Nazis burned the synagogue to the ground in 1938, and the Jews in town were either murdered or driven out. My hope probably lies in civil records, though there is a Jewish cemetery in Osthofen that also may hold clues. 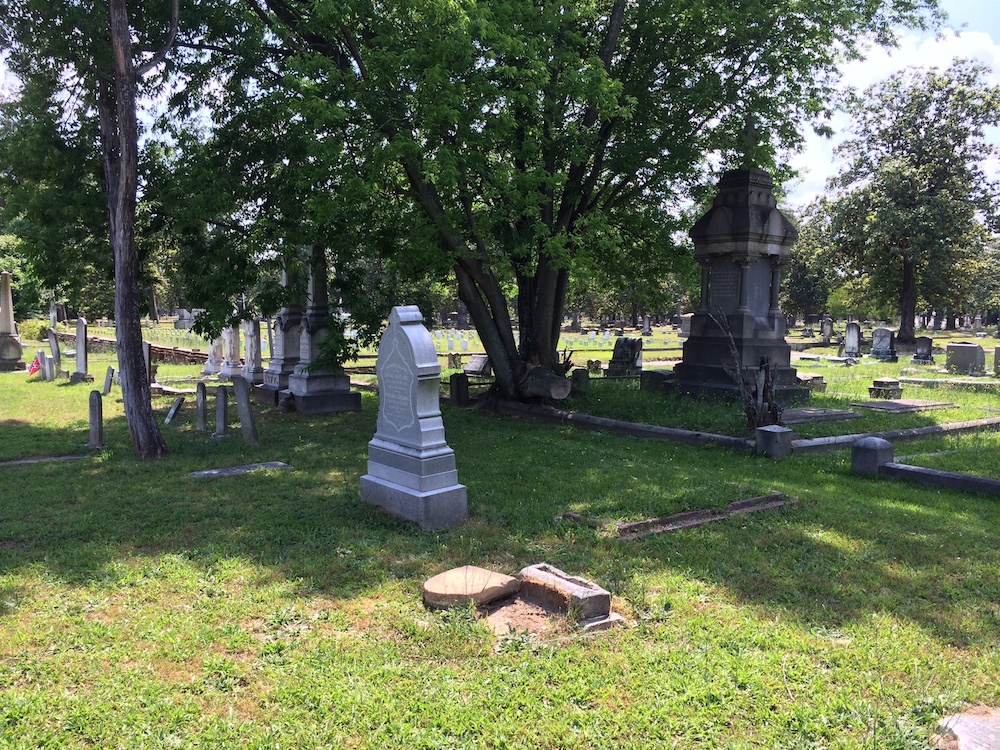 This story is from The August Chronicle dated October 29, 1876. If you have any information on the whereabouts of the referenced cane, I would love to hear from you. Isaac Mayer, who brought the cane from Germany and gave it to Judge Gibson, was my 3rd great grandfather.

Restored to Its Owner After a Long Separation.

We find the following in the Atlanta Constitution, of yesterday:

The morning after Gov. Smith’s speech in Augusta, your reporter was sitting quietly in the law office of Thos. H. Gibson, when in came the Souther Express man with a walking cane, labeled “From D. H. Chase, for T. H. Gibson, Augusta, Ga.”

Mr. Gibson received it, and stated that it had an interesting history. He went on to say that in the Summer of 1861, while the First Georgia Regiment was stationed at Laurel Hill, in West Viriginia, Judge Gibson visited it. While there the army under General Garnett was forced to retreat before McClellan’s forces. And at the battle of Corrick’s ford, on Cheat river, Gen. Garnett was killed, our baggage train captured, and with it the Judge’s walking cane. A member of the Ninth Indiana Volunteers got it and kept it for several years, when he gave it to Col. R. P. Dehart, who several months ago gave it to Judge D. H. Chase, of Loganport, Indiana.

The latter a few weeks ago wrote to Mr. M. S. Kean, a prominent dry goods merchant of this city, and who was taken prisoner and fell into the hands of Captain Chase, at the Corrick ford fight, stating he had in his possession a cane captured at that fight, and supposing it was General Garnett’s, wanted to know how he could find the owner. On the 18th instant Mr. T. H. Gibson wrote to Captain Chase, describing the stick his father had lost, and the 24th instant received a reply that the stick described was the one he had, and he would forward it immediately by express, and it arrived this morning. The cane was the more highly appreciated and valued by Judge Gibson by reason of the fact that it was a present to him from a very warm friend, now deceased, Mr. Isaac Mayer, a former citizen and merchant of this place, who brought it from Germany.

Original story as a PDF.