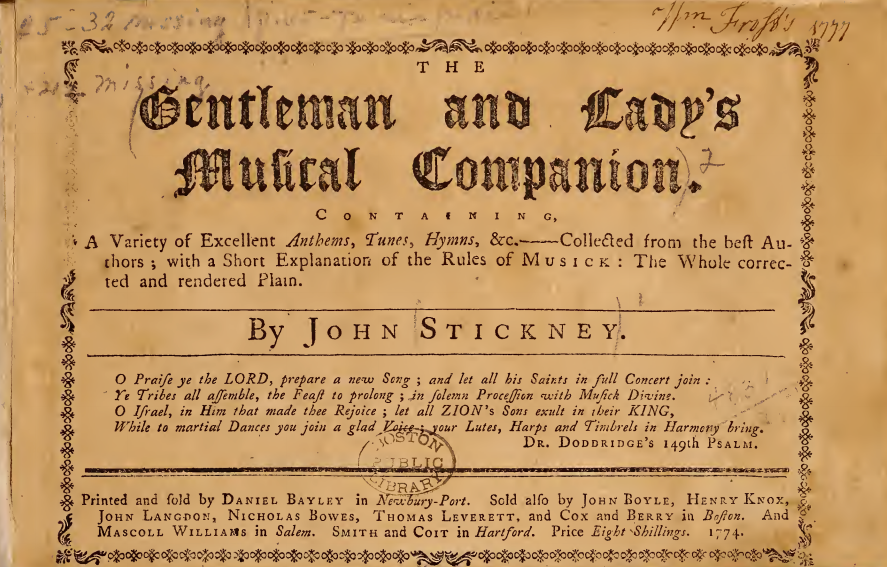 My 6th great grandfather (paternal), John Stickney, was born in 1742/1744 in Stoughton, Norfolk, Massachusetts, and died in South Hadley, Massachusetts in 1804. Here is some fascinating information about his life as a musician:

STICKNEY, John, musician, b. in Stoughton, Mass., in 1742; d. in South Hadley, Mass., in 1826. He was taught music while a boy, and subsequently settled in Hatfield, where he gave lessons. Later he travelled extensively through the New England states, and acquired reputation as a teacher and composer, but finally settled in South Hadley, where he continued his teaching. He published “The Gentlemen and Ladies’ Musical Companion” (Newburyport, 1774), a valuable collection of psalms and anthems, together with explanatory rules for learning to sing.

In 1774 John Stickney, teacher of music, published at Newburyport, Massachusetts, “The Gentlemen and Ladies’ Musicial Companion,” a small, but in its time a very valuable collection of psalms and anthems, together with explanatory rules for learning to sing; the whole corrected and rendered plain by the author. John Stickney was born in Stoughton, Massachusetts, in 1742; and while a butcher boy he learned the new style of music, near boston, of one Dunbar; went to Hatfield, and there taught the new music to all such as desired to learn it, and afterwards taught in all the principal towns in that region, but not without much opposition from those who preferred the old style, or that of the Pilgrims. For many years the wife of Mr. Stickney taught music with him, she being a very excellent singer, and having a powerful voice; she travelled with him from place to place, and was an excellent assistant. They finally settled at South Hadley, and continued to teach until John was sixty-five years old. Mr. Stickney died in 1826. His book was printed by Daniel Bailey, of Newburyport, who printed many of the early collections. The music was engraved, and is like other specimens of that time.

And finally this from Daniel T.V. Huntoon’s History of The Town of Canton, Massachusetts (1893), CHAPTER XVIII :

Rev. Theron Brown says “the ancient town of Stoughton, which included the present Canton, was the cradle of New England middle-age psalmody, – that strange, quaint, minor mode, with its ‘ down, up ‘ time and its complicated fugues, whose most characteristic specimens are now presented and performed as musical curiosities. ‘ Portland ‘ and ‘ Lenox ‘ and ‘ Windham,” Lebanon ‘ and ‘ Majesty,’ ‘ New Jerusalem ‘ and the ‘ Easter Anthem,’ were all born upon the soil; and the familiar Canton names of Capen, Tilden, Tolman, French, Dickerman, and Belcher appeared ninety years ago on the list of the singing class of William Billings.” Long before the singing-school of Billings, a young man named Elijah Dunbar learned while going through Harvard College, in addition to his Greek and Latin, the art of reading music. On his graduation in 1760, he returned to his native town and at once organized a singing-school and gave to his neighbors the benefit of his knowledge.

In 1762 I learn from the ” History of Dorchester ” that” there was a singing meeting at Stoughton,” and two years later I have evidence that there was an organization in working order for the purpose of practising in vocal music. This was the year the small-pox visited Canton, and it was deemed expedient to send word to the Bridgewater singers who were wont to attend not to come over. Singing meetings were held at the houses of neighbors; sometimes it would appear that they had ” prodigious jangling.” On the 13th of December, 1764, when William Billings was married to Mary Leonard, there were more than forty persons at the wedding, and the singing must have been very fine. Mr. John Stickney seems to have known something about the art, for when Jesse Billings came from Hatfield, and wanted some one to teach them to sing, Stickney went to their assistance. In 1766 ” our singers are at Mr. Adams’s.” John Kenney, a fine bass singer, went with Elijah Dunbar to Boston to buy new books the same year; and they on March 19 ” draw books and sing the old 50th the first time.” On Feb. ri, 1767, the Braintree singers came to Canton, but got into a religious discussion and had ” a remarkable time;” subsequently they met at the old May tavern on March 9, all the differences were made up, and ” there seems to be great love and harmony.” On August 4, they have in the old gambrel-roofed house still standing at Ponkapoag ” sweet singing at Elijah Crane’s,” and on the 24th ” fine fidling.” In 1770 new books were introduced; and on the 2 ist of December, they were used in the house of Samuel Capen for the first time. During the interval from the year 1764 to 1774, the principal persons belonging to this society, or the persons at whose houses they met, were: Elijah Dun-bar, Elijah Crane, Squire Dickerman, John Stickney, John Kenney, Samuel Capen, Enoch Leonard, John McKendry, Thomas Crane, Henry Stone, Theophilus Lyon, Robert Redman, George Blackman, Philip Liscom, Asahel Smith, Samuel Tilden, Wadsworth Talbot, Abner Crane, William Patrick, Benjamin Gill, Jeremiah Ingraham, John Withington.

In 1774 William Billings, then twenty-eight years of age, gave instruction in music, or, as they would have said, taught a singing-school in the tavern of Robert Capen. He interested the young people of Stoughton in his work, inspired them with his own enthusiasm, organized them into choirs, taught them to despise foreign music, especially that of England, and jumbled religion and patriotism into his stanzas with such a grace that he became the most successful organizer of music in America.